Photoshop hurts! Studies have repeatedly shown that the flawless images that appear in fashion and beauty ads cause a number of health issues in women, some of whom are literally killing themselves to look like a real life version of a photoshopped image. In general, Photoshop is an innocent and incredibly useful creative tool..until it is used to sell products that hold the promise of achieving an unachievable pore-less perfection. Should we start putting warning labels on overly-processes images of impossibly perfect women?

We are naturally aspirational creatures, and can’t help chasing after perfection. Nearly every person on the planet wishes they had perfect skin or the perfect body. But the funny thing about perfection is that it’s a slippery concept. 300 years ago the ideal woman had small breasts, round hips and thunder thighs. In 1920s America a flat chested boyish figure with a round face and teeny tiny lips was the beauty ideal. Women would actually bind their breasts in order to achieve a flatter look.

Effectively, you are not the one who decides how to be beautiful, the culture around you does, through the movies, fashion advertisements and editorials it produces. Ideals change with the trends. One small spark can set off a forest fire, and all it takes is one small seed of an idea to be planted to change how everyone sees the world. Before the young and very girlish Kate Moss came along models were women. Supermodels like Cindy Crawford had curves, muscles and broadness. Their whole presence was about feminine strength. But Kate Moss transfixed everyone with what was considered a strange kind of beauty at the time. She was small, short, extremely thin and charmingly imperfect. Editors pointed out how she had the look of a heroin addict about her, and in this incredibly small way “heroin chic” – a radically new form of beauty, was born. It was the spark that set the whole industry on fire.

In an instant models got younger, visibly thinner, more fragile and more girlish in appearance. Within two years women went from idealizing Cindy Crawford’s strong curves, to starving for that ultra-thin and fragile look they saw on billboards everywhere. Although from our perspective it may look like an immense and complicated shift in popular attitude, the reality is that it really doesn’t take much to revolutionize beauty standards. A captivating model on in a powerful Calvin Klein ad campaign could do the trick.

The Birth Of Photoshop And Unattainable Perfection 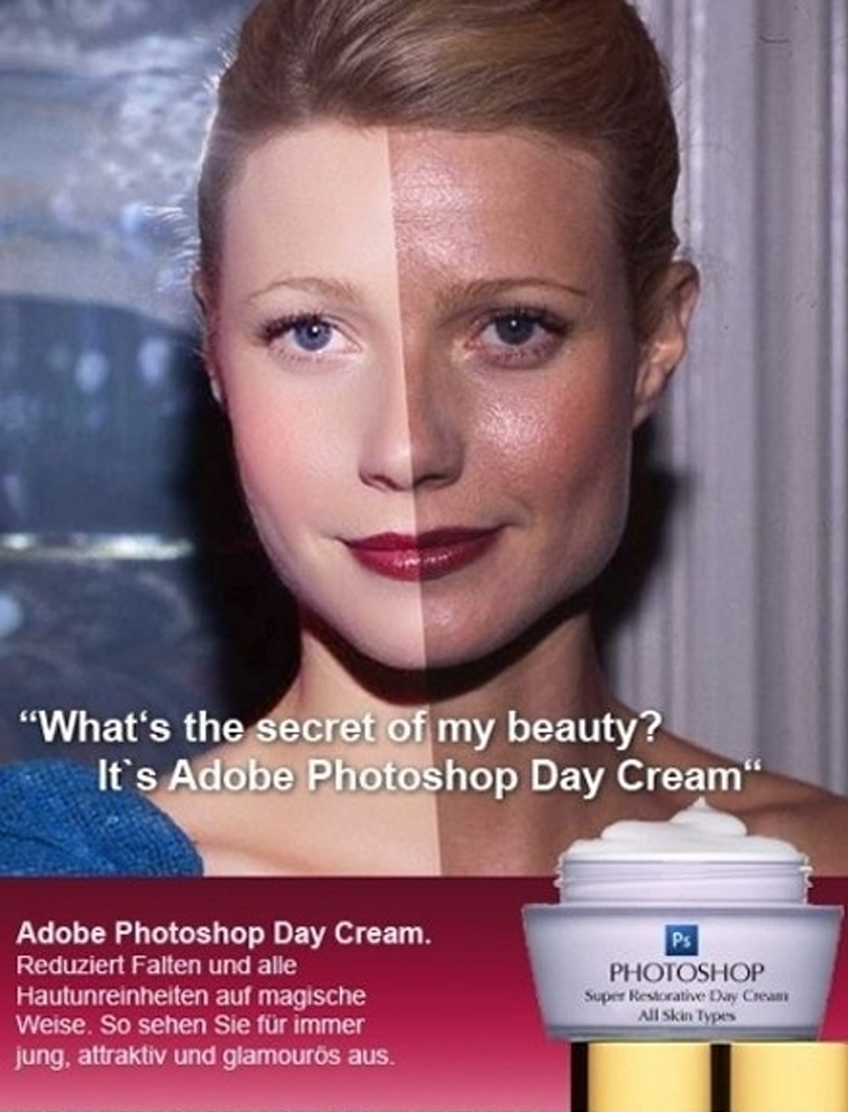 Photoshop was launched on February 19, 1990, just four months before Kate Moss’ big modeling debut on the cover of The Face magazine. It was a remarkable coincidence. Photoshop would go on to have as profound an effect on the fashion industry as Kate would have on the appearance of models. It was a decided turning point in our cultural perception of beauty – a point at which our standards and expectations would begin to grow unreasonably high. Skin would become waxy smooth, teeth flawlessly white, the body without a single fold, wrinkle, vein or bulge. Suddenly smiling faces had no natural laugh lines, and slouching bodies no sign of skin folds. These are simply things that all bodies do, but thanks to the extensive use of Photoshop in the media, the natural began to seem unnatural to us. We forget what real bodies and faces are supposed to look like and fixate on an airbrushed ideal. Real skin with real texture starts to seem unattractive, and we feel like the only people on the planet with cellulite, stretch marks and pores. There is a whole generation of young woman that has no idea that “imperfect” skin is actually normal skin, normal skin that all normal people have, whether they are models, actors or elementary school teachers. They have no way of knowing this because the media does such an excellent job covering up anything that might make a celebrity look like a mere mortal. [Click here for a better idea of what celebrities really look like]

Of course, none of this is Photoshop’s fault. It’s not the car, it’s the driver that turns something practical into something dangerous. As a creative tool Photoshop is one of the most amazing things to happened to photography. It has expanded the creative range of a field that used to be about simply catching moments in time.  The only problem is, with Photoshop the line between fantasy and reality becomes indistinguishable. After all, a picture is not a painting, it was taken of a real life human being somewhere out in the real world. There’s really no way of knowing whether she really is that perfect, or whether there’s been some photoshop magic applied. This fantasy is particularly easy to swallow in the fashion industry because model’s were never supposed to look like real people in the first place. We expect them to be alien-like in their beauty and perfection, which only adds to the confusion. In the end, subconsciously we always assume that the picture is probably more real than not. And that our own bodies completely suck in comparison.

Why Does The Fashion Industry Call Normal Models Plus Sized?

Two decades ago a plus-size model averaged anywhere between a size 12 to 18. Today, the majority of plus-size agency signed models are around a size 6 or 8. Whatever may have been true of the past, in the fashion industry today the words “plus size” basically mean, “this is the limit of how heavy we’re willing to go.” It’s really not about being voluptuous, as many people think of it. Rather, it’s about being more plus than a size 0. Anything larger than nothing is something, hence the not always so plus-sounding plus. According to that rationale, if your average runway model is a size 2, then even a size 4 model would be considered plus sized.

Looking at the images above the average woman will have one of two thoughts: 1. If that’s plus sized then I’m whale sized, or 2. Plus size looks normal size to me. Either way, the models you often see in plus sized editorials seem confusingly thin. Perhaps even insultingly thin. When Cosmo magazine recently posted an image of a thin looking model named Robyn Lawley there was a colossal backlash against the publication for referring to her as a plus size model. No one could make sense of why the fashion industry would continue to call women with a healthy normal build as plus size, or why we don’t see more of this kind of body shape on the cover of every magazine on the planet.

The reason we don’t see more “plus size” models is the same reason the industry overdoes it with the Photoshop. The closer a model is to what the average woman actually looks like, the less aspirational she is. And the less aspirational, the less the image can feed off that hardwired aspirational impulse you have in your brain that makes you buy things you don’t really need in the hopes that they will bring you closer to perfection. It’s strange catch22. Images of fabulously thin and beautiful women lower our own self-esteem, but heighten our resolve to get what we want (a better body, nicer hair etc). They don’t make us feel good, but they compel us to buy. It sounds terrible, and it is, but there’s also a silver lining because it means that ultimately, we are indirectly in control of the images around us. If we want to change things we’ll need to protest with our wallets not our mouths.

The Other Reason The Fashion Industry Uses Photoshop

One of the things rarely mentioned about photoshop in advertising and editorial is that it actually serves to wipe away a model’s personality. By creating a beauty that is uniform and flawless the model becomes bland in her perfection. She is so flawless that she becomes a blank canvas that has no character of her own, but serves only to draw attention to the clothes she’s wearing. It’s the same reason why the 80s concept of “Supermodels” as larger-than-life personalities has completely died away, and why models are generally discouraged from smiling on the catwalk. The idea is that any allusion to a personality takes attention away from the clothes. The fashion industry needs charismatic models, but does not want them to be so charismatic that their personalities shine brighter than the brand they are supposed to be representing.

Law-Makers Step In To Regulate Photoshop Excessive Use

Though most women today realize that the images in advertisements are not completely realistic, many don’t realize the extent to which these unrealistic representations of beauty are imprinting themselves on their interpretation of physical perfection. That’s where all the danger lies. Without even realizing it, we come to expect flawlessness as much from models and celebrities as from ourselves. Anti-Photoshop advocates have been working hard for years to put some kind of regulation in place for excessive use, and it looks like they are finally getting somewhere. A new bill called The Truth in Advertising Act (H.R. 4341) hit Congress, and promises to regulate Photoshop in advertisements to maintain a certain level of realism.  The bill came into existence because of the strong research that clearly shows “The dissemination of unrealistic body standards has been linked to eating disorders … [and] has a particularly destructive health effect on children and teenagers.” (from the bill’s intro)

Though it’s unclear how the bill intends to regulate the use of Photoshop, one suggestion is placing a simple disclosure label indicating that the model’s appearance in the image has been altered. If a drug were proven to have certain dangerous side-effects, they would be clearly state it on the packaging. The same goes with cigarettes and alcohol, so it’s not entirely unreasonable that the same standards would be extended to advertising. In the UK, this kind of Photoshop regulation has been in place for years. In fact, this Lancome advertisement featuring Julia Roberts, and this Maybelline ad featuring model Christy Turnlington were banned by the UK Advertising Standards Authority for being too unrealistic.

As the cases of eating disorders continue to rise, The Truth in Advertising bill may be a step in the right direction. We all hold ourselves up to a higher standard, it can be disastrous when that standard becomes so impossibly high, it leaves us with a permanent feeling of failure.

A Parody of the Fashion Industry’s Love Affair With Photoshop

A brilliant indie film-maker named Jesse Rosten created a spoof of the fashion industry’s love affair with photoshop. It’s a brilliant parody, but only too true. His video spoofs a typical beauty advertisement, featuring a new beauty miracle product that can be “applied” to achieve that pixel perfect look that’s “almost unreal..istic.” Although it specifically targets the industry’s use of photoshop, it raises questions about the products we buy into as well in our never-ending pursuit of perfection. Hope you enjoy!